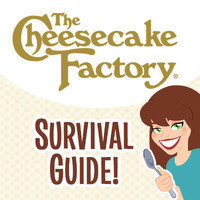 Do NOT head to The Cheesecake Factory without reading this first... We've got the best picks, shocking high-calorie skips, and more!

If SkinnyLicious is in the name of your dish, don't forget to say it when ordering. There are regular versions of some of these meals elsewhere on the menu, and you could end up with a much higher-cal dish.

In case you're unaware, The Cheesecake Factory's menu is massive. Rather than dissect it line by line, we've called out some of the best picks in different categories, plus shocking high-calorie skips!

Looking for the nutritional 411 on a menu item not listed here? The Cheesecake Factory website doesn't provide these deets, but we've got you covered... Click here to download the official Nutritional Guide!

As with the majority of chain restaurants, most of the sodium counts on the menu are high. If you're closely watching your salt intake, you may want to limit dining out altogether. And check out these sodium-slashing hacks. 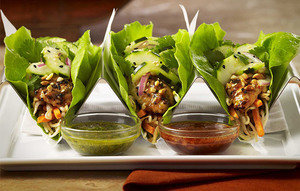 Tacos wrapped with lettuce instead of tortillas? These couldn't be more HG if they tried! We're particularly nuts about the lower-calorie Mexican ones...

Feeling schmancy and a little adventurous? Here we have red and golden beets, topped with arugula, diced apple, pecans, and vinaigrette. Mmmm...

If you feel the need for some pre-meal grazing, skip the bread and order some edamame for the table. Since you have to shell the beans, you won't wolf 'em down too quickly, which is always a bonus.

Pizza cravings? Scratch that itch with this simple flatbread. Paired with a Tossed Green Salad (100 cals before dressing), we'd totally make a meal of this...

This is our favorite! The tuna comes topped with aioli, plus a wasabi pesto on the side (which isn't even needed). If you wanna shave off some sodium, skip one of those sauces...

Some of the appetizers are no-brainer calorie disasters. Fried Macaroni & Cheese? Obviously. Southern Fried Chicken Sliders? Doy. This corn-based app -- inspired by tamales, which are typically steamed or boiled -- sounds practically virtuous in comparison. But the cakes are fried and smothered with fatty toppings! Pass. P.S. The Fire-Roasted Fresh Artichoke is still as bad as ever -- click here for a DIY swap. 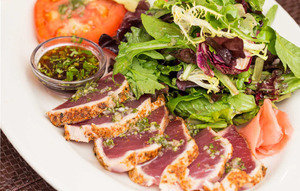 How can you go wrong with mixed greens, avocado, tomato, lightly seared ahi, and wasabi vinaigrette? So much yum! And CF's tuna quality is majorly impressive...

Fresh, healthy... fantastic. With greens and other veggies, this salmon salad is dressed with the super-tasty SkinnyLicious Vinaigrette. Go for it.

This one's more fun than the name suggests! It's got asparagus, roasted beets, edamame, radicchio, apple, white cheddar cheese, and more. To slash some sodium, trade the vinaigrette for plain vinegar with a splash of oil.

This thing is hard to resist. It's got chicken, avocado, bacon, corn, blue cheese, apple... Yes! Skip the bacon and/or blue cheese to shave off calories and sodium.

It might sound similar to the SkinnyLicious Factory Chopped Salad, but this avo-chicken salad is a calorie catastrophe! Tortilla strips, cashews, and a honey-peanut dressing all play their part. Get it together, Sheila...

HG tip: If you go with a standard salad, skip the default dressing. Ask about the SkinnyLicious dressings, and get one on the side. 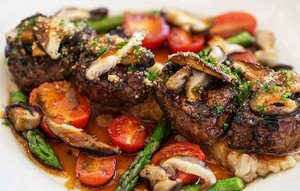 Angus beef with asparagus, shiitake mushrooms, and cherry tomatoes. NICE. Over dollops of mashed potatoes. AMAZING. In a Madeira wine sauce. DELICIOUS. We can hardly believe it's guilt-free, but it totally is...

The regular Baja Chicken Tacos are a mess -- 1,210 calories! What's the point when you could get these simple soft tacos instead? Don't be silly...

What a glorious pile of protein, veggies, and grains. We're talkin' tomatoes and farro mixed with grilled chicken, capers, artichokes, and basil. We can taste the freshness from here...

HG menu hack: Ask if you can get a side of veggies instead of that angel hair pasta. Then mix it in with the extra sauce and asparagus. Then this dish will have even fewer calories and more fiber -- mega score!

"Sautéed Chicken Breast with Lemon Sauce, Mushrooms and Capers. Served with Angel Hair Pasta." You'd hardly guess from that description this is a 2,000-plus-calorie entrée. And you'd likely be stunned to learn this meal has more calories than the Famous Factory Meatloaf with its gravy and mashed potatoes. Yikes. 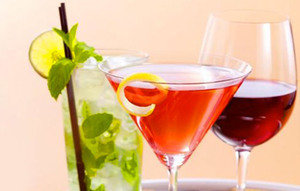 * There are no calorie listings for the SkinnyLicious cocktails (boo), but they've been promoted as having 150 calories or less (yay!). Choose from Skinny Red Sangria, Margarita, Mojito, Cosmopolitan, and Long Island Iced Tea.

* CF's nutrition guide lists wine as 120 calories for 5 ounces... but then admits their pours are 6.5 ounces. So that's more like 156 calories per glass, FYI. 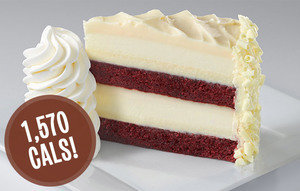 A shockingly good find... We love that there's a Bowl of Fresh Strawberries on the menu! Served with a side of whipped cream, the whole thing has 250 calories and 11g saturated fat. Pair that with a coffee sweetened with no-calorie sweetener, and you're all set.

P.S. Word on the street is that CF is adding a "Superfoods" section to its menu. No word yet on nutritional info or specific items, but we’re excited to learn more!

Today, July 31st, is… National Raspberry Cake Day? Not terribly common, but we're down. Toss some fresh raspberries over this two-ingredient chocolate cake...

Your favorite dining companions need this info, and so does everyone else you know! Click "Send to a Friend" now…