Hungry Girl has gotten more sodium conscious since Lisa started it back in 2004. And since we're ALL about flavor here at HG (if it doesn't taste good, why bother?), we've developed ways to reduce the salt content in dishes without making them any less delicious. We’ve got some sodium-slashing tips 'n tricks you can apply to any meal or recipe! But first, a little label lingo…

• Sodium Free: The lowest of the low. 5mg or less per serving.

• No Salt Added: This one really depends on how high in sodium the food itself is to begin with. Still, it generally signals something is pretty low in salt!

• Light in Sodium: Compared to the regular version of that food, this has at least 50% less sodium.

• Reduced/Less Sodium: Still an improvement, but higher than the others. At least 25% less sodium than the regular food.

And now… the tips & tricks! 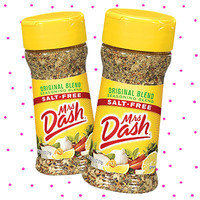 Omitting the occasional dash of salt may seem obvious, but that could leave your food tasting bland. Instead, swap it out for a salt-free seasoning blend, like Mrs. Dash Original Blend. Confession: We used to be skeptical of mixes like these, but when working on the HG diet book, we discovered they're actually fantastic! You may want to leave out other seasonings called for in the recipe to balance out the additional seasonings in the no-salt blend. Bonus tip: ALWAYS season raw poultry before you cook it! 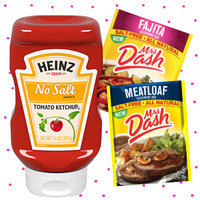 Fill Your Pantry with Lower-Sodium Staples

Now more than ever, there are many products on shelves touting those above-referenced sodium claims. Think broth, ketchup (check out Heinz No Salt Added), seasoning packets (Mrs. Dash has a whole lineup that's salt-free), tuna, sauces, condiments, soups, and more. Saving a little sodium wherever you can will really make a difference... It all adds up! 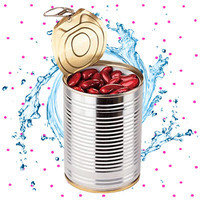 If a recipe calls for canned beans or veggies, make sure you rinse them really well, because get this: Rinsing eliminates about 35 percent of the sodium amount listed on the can! Pretty much all HG recipes with canned beans call for them rinsed, and those sodium savings are factored into the stats. Starting with no-salt-added canned goods can save you even more. You can also substitute frozen or fresh veggies in a recipe; just adjust the cook time as necessary, and check to be sure the frozen veggies are salt-free. 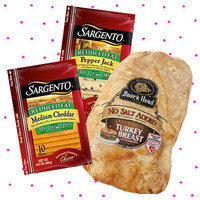 When it comes to deli meat (like turkey) and precooked meat (like chicken), keep an eye out for those lower-sodium options. If you don't see these pre-packaged, check the deli counter. Boar's Head has great no-salt-added turkey! Another option is to cook it up yourself, of course... Use one of those salt-free seasonings we mentioned earlier. This is especially great for recipes and meals that call for precooked chicken. Cook up a bunch at once to use throughout the week! PSA for cheese lovers: Sargento makes some of the tastiest reduced-fat cheese slices out there, and they’re significantly lower in salt than a lot of the competitors. And skinny slices like Sargento Ultra Thin and Kraft Natural Slim Cut will save you sodium, fat, and calories! 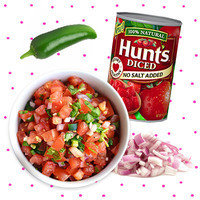 It’s surprisingly easy to whip up a low-salt salsa. Start with diced tomatoes (fresh or canned with no salt added), and just add some diced onion, herbs, and seasonings. We have a great recipe for at-home salsa with 70% less sodium than the jarred stuff! Another great sodium-saving hack: Turn canned crushed tomatoes into pizza or pasta sauce. It’s nice and thick, so just season it up (sans salt), and you’re good to go!

When it comes to lowering the salt content in existing recipes, you might want to reduce or omit the condiments. Mustard, hot sauce, salad dressing, etc., tend to be high in salt. If you can't find reduced-sodium options, use less or skip 'em altogether. (FYI: A little cayenne pepper can replace the heat of hot sauce, and vinegar and lemon juice are both sodium-free and make good dressing swaps.) This also goes for pickles and jarred jalapeños, which tend to be on the high end when it comes to sodium.

There you have it! Kick that sodium to the curb…

It's the month of Movember. The Movember Foundation is a legit charity dedicated to changing the face of men’s health. Read more about it here, and encourage your guy pals to put down the razor this month!

Show your friends you care, and save 'em some sodium… Click "Send to a Friend" now!

We may receive affiliate compensation from some of these links. Prices and availability are subject to change.

*The WW Points® values for these products and/or recipes were calculated by Hungry Girl and are not an endorsement or approval of the product, recipe or its manufacturer or developer by WW International, Inc., the owner of the Points® trademark.

Hungry Girl provides general information about food and lifestyle. This information and any linked materials are not intended and should not be construed as medical advice, nor is the information a substitute for professional medical expertise or treatment. Click here for more information. 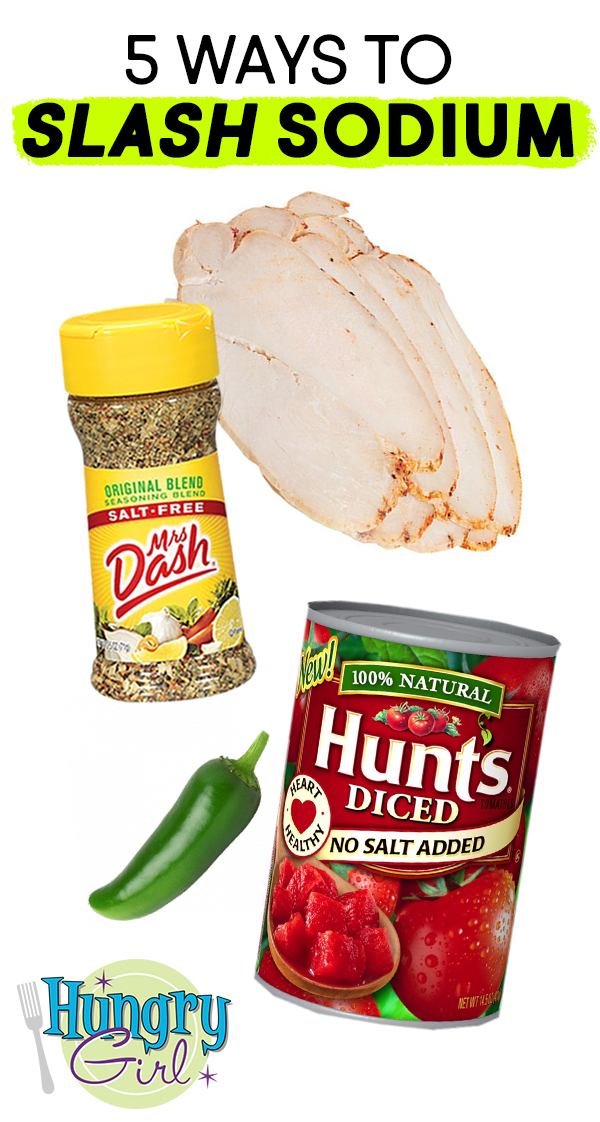