When it comes to diet-friendly whipped toppings, there aren't many widely available choices. There's Cool Whip Free and Fat Free Reddi-wip. That's pretty much it. Sure they're both white, creamy, low in calories and fat-free, but they're very different from one another. For starters, one comes frozen in a tub; the other in an aerosol can. And differences go way beyond their packaging. HG is here to cut through all the whipped cream lies and give you the straight scoop on the fluffy stuff. Read carefully -- and pay close attention. What you're about to read may change the way you look at dessert... FOREVER. 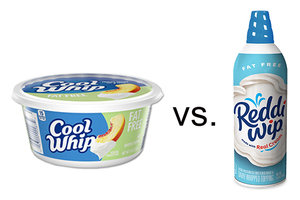 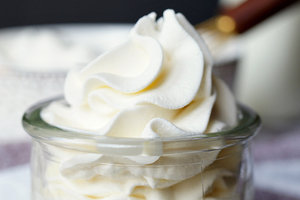 Cool Whip Free - Cool Whip Free is definitely artificial-tasting. It doesn't quite melt in your mouth, and it certainly doesn't taste natural in any way (probably because, um, IT ISN'T). But there's still something enjoyable and delicious about it -- even if it does taste super-fake.

Fat Free Reddi-wip - This stuff is FREAKISHLY FANTASTIC!!!!! Fat Free Reddi-wip is crazy-creamy and natural-tasting (it's made with real milk and cream). It's light -- it's airy -- it's PERFECT. Careful not to down the whole can in one sitting. There are 40 servings in there!!!  The Winner: Fat Free Reddi-wip. It CREAMS the competition!

Category 2 - EASE OF USE 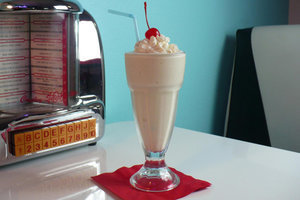 Cool Whip Free - You have to wait for it to defrost, so if you're impatient, CWF may not be the ideal topping for you. It comes in an easy-to-seal tub that can last for weeks in your fridge. And you can re-freeze it, too. Nice!

Fat Free Reddi-wip - You can pop the top off and begin eating it instantly, but that top doesn't fit securely back on the can once opened. And if you're not careful, you can accidentally let all the air out of the can before finishing the whipped cream, leaving it half-full, yet useless. Bummer. (But don't be one of those people. Aerosol cans are easy to use!) 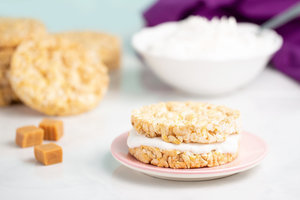 Cool Whip Free - Freeze this stuff and it tastes exactly like super-creamy, full-fat ice cream. Stuff it between rice snacks and VitaTops to make awesome frozen sandwiches! It's also fantastic mixed with pudding in desserts and pies. It's not bad plopped on top of hot beverages, but not quite as good as a topping for frozen blended drinks. It can also sit for hours on top of desserts in the fridge without wilting in any way. We're not sure if that's a good thing, or just plain scary.

Fat Free Reddi-wip - Nothing (and we mean NOTHING) beats a nice squirt of Reddi-wip on top of any beverage (hot or cold), ice cream treat, pie or cake. Fat Free Reddi-wip is the way to go for anything that will be assembled and eaten immediately. Pudding -- pie -- hot cocoa -- faux Frappuccinos -- they all SCREAM for the stuff. But don't even think about freezing this or mixing it with anything -- or for that matter, using it in or on anything that isn't going to be eaten immediately. It just won't work.

The Winner: It's a DEAD HEAT! They're each great at their own thing. This one is too hard to call. 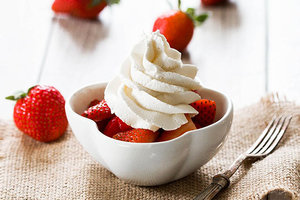 Cool Whip Free - It's easy to use, the aqua-colored tub is pretty, it freezes incredibly well and it tastes pretty good. 15 calories for two tablespoons ROCKS.

Fat Free Reddi-wip - It's fun to use and tastes INCREDIBLE. And 5 calories per two tablespoons ROCKS MORE!!!

AND THE WINNER IS... FAT FREE REDDI-WIP!

Cool Whip Free may freeze like nobody's business and work great in recipes, but Fat Free Reddi-wip tastes WAY better. And the can is more fun to use than that boring old tub. Also, Fat Free Reddi-wip doesn't contain any high fructose corn syrup and Cool Whip Free does. WE LOVE FAT FREE REDDI-WIP! Congratulations to both of today's super-creamy competitors.

July 15th is National Tapioca Pudding Day. Get ready to celebrate. Stock up on Kozy Shack's No Sugar Added version!

Did a friend send you this? SIGN UP NOW & get your very own DAILY Tips & Tricks!