If you haven't already heard, we figured out a formula for low-calorie bagel bites featuring a hidden ingredient that you can't even taste... cauliflower! (See our Everything Bagel Bites for proof.) Now, we've given the recipe a sweet twist. It's time to dig into cinnamon bagel balls studded with raisins! Well, it'll be time once you whip up a batch, that is... 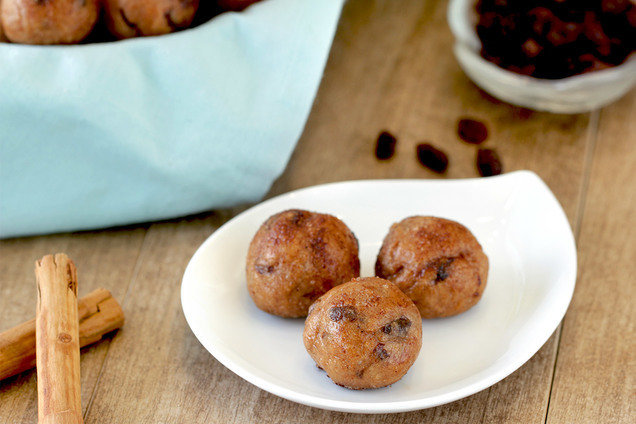 Meanwhile, pulse cauliflower in a food processor until reduced to the consistency of coarse breadcrumbs. (Even if you begin with cauliflower rice, don’t skip this step!)

Transfer to a fine-mesh strainer to drain and cool, about 10 minutes.

Using a clean dish towel (or paper towels), firmly press out as much liquid as possible.

Evenly form into 18 balls (about 1 1/2 tbsp. each), and place on the baking sheet, evenly spaced.

Bake until tops are golden brown and insides are cooked through, 8 - 10 minutes.

In a small microwave-safe bowl, microwave remaining 1 tbsp. butter for 10 seconds, or until melted.

In another small bowl, mix remaining 1/2 tsp. cinnamon with sweetener.

It's almost the end of National Salad Month (a.k.a. May). Celebrate in a big way, with a big, big salad!

Pass along this recipe to your bagel-loving buddies -- click "Send to a Friend" or forward it now!