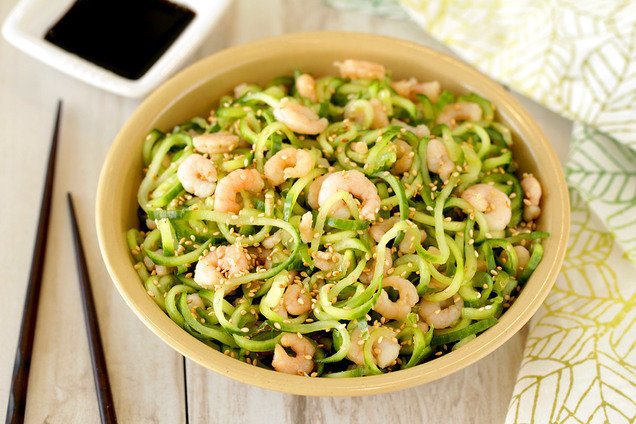 Sunomono salad is a staple at sushi restaurants. Here, we give it a modern twist with a punch of protein. It's basically perfect!

Using a spiral vegetable slicer like the Veggetti, cut cucumber into spaghetti-like noodles. (If you don’t have a spiral veggie slicer, peel cucumber into thin strips, rotating the cucumber after each strip.) Roughly chop for shorter noodles.

Transfer noodles to a strainer, and pat dry.

Add cucumber noodles and shrimp. Gently toss to mix. Cover and refrigerate for at least 15 minutes. 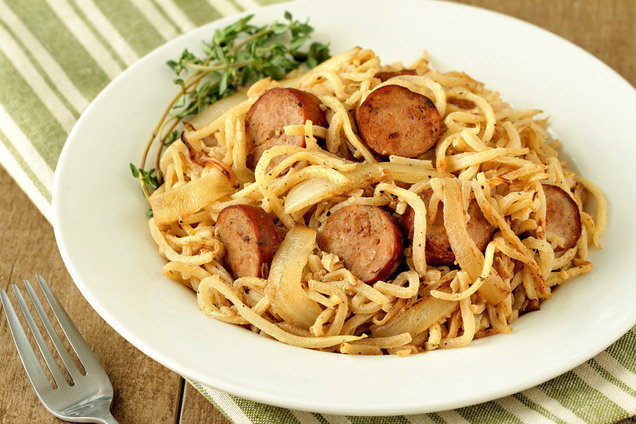 How has it taken us this long to spiralize turnips?! The results are AWESOME, especially in this completely delicious sausage-studded stir-fry!

6 oz. (about 2 links) fully cooked chicken sausage with 8g fat or less per 3-oz. serving (like the kind by Applegate Organics), sliced into coins

Bring an extra-large skillet sprayed with nonstick spray to medium-high heat. Add turnip noodles and 1/4 cup water. Cover and cook for about 7 minutes, uncovering occasionally to stir, until noodles have mostly softened and water has evaporated.

Transfer noodles to a bowl. Remove skillet from heat; re-spray, and return to medium-high heat. Add onion, and cook and stir until slightly softened and lightly browned, about 4 minutes.

Add sausage coins to the skillet. Cook and stir until onion has mostly softened and sausage has browned, about 3 minutes.

Reduce heat to medium low. Return noodles to the skillet, and add all remaining ingredients. Cook and stir until cream cheese has melted and coated the noodles, and entire dish is hot, about 2 minutes.

FYI: As an Amazon Associate, we may receive compensation from some of these links.

Today, May 11th, is Eat What You Want Day. We've got healthier recipes for whatever you crave... Grilled cheese? Burgers? Pizza? YUP.